When you break or sprain your leg, ankle, or foot, crutches are the most commonly used mobility tool to help you get around so you don’t cause more damage.

Since Ancient Egypt, humans have used crutches, but what we know as modern-day crutches were invented by Emile Schlick in 1917. When you need to use crutches, learning how to use them can make all the difference in your recovery. And if you’ll need crutches long-term, knowing how to use them correctly right from the start can help make your life easier and more comfortable.

If you find yourself in a situation where you need crutches, here’s everything you need to know about using them and finding crutches in Ireland.

How to Use Crutches

When your doctor tells you you’ll need to use crutches, properly using them is the only way to make a smooth recovery and avoid any further discomfort or injury. It may take some time to get used to, but you’ll get the hang of it as you practice.

How to Use Elbow Crutches

To use crutches when you’re NWB, you’ll want to keep all your weight off the injured foot. You’ll do this by keeping the injured leg bent slightly at the knee and off the ground.

If you’re partial-weight bearing, you’ll be able to “walk” on your foot but keeping most of your weight off it. Using crutches helps to prevent you from putting too much weight on them.

To use crutches as WBAT, you’ll walk like you typically would if you weren’t injured. The crutches assist you if you feel like you need to take some weight off the injured foot.

How to Adjust the Height on Crutches

How Crutches Should Fit

Crutches should fit so that you can move around comfortably without causing more pain. 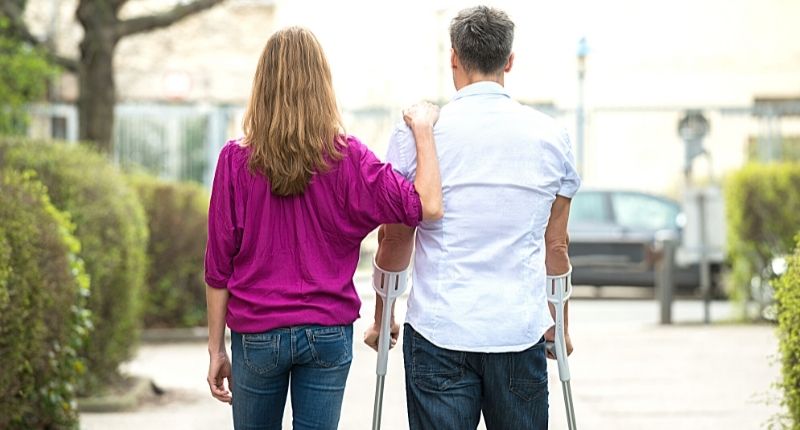 For elbow crutches, you’ll want to start by standing up straight with your shoulders relaxed and your arms hanging by your sides.

The handgrips should fall at the crease of your waist when you fully extend your arms. When adjusted correctly, your elbow should be bent at a 30-degree angle when holding the handgrips.

You’ll need to adjust the elbow cuffs too. They should be one to two inches below the bend of your elbow.

For underarm crutches, you’ll want the underarm support two inches under your armpits. This allows you to keep the weight in your hands and not on your armpits.

You’ll need to measure the distance between the top of your hips to two inches under your armpit. Once you’ve gotten your crutches, you can test the height and make adjustments as needed.

More Reading: Walking Sticks & Canes, Everything you need to know

Where to Buy Crutches in Ireland

Whether you’ve sprained your ankle, had knee surgery, or broke your leg, if you need crutches in Ireland, these are the best places to buy them.

Gomobility is an award-winning mobility company providing people in Ireland with everything they need to get around, including crutches. 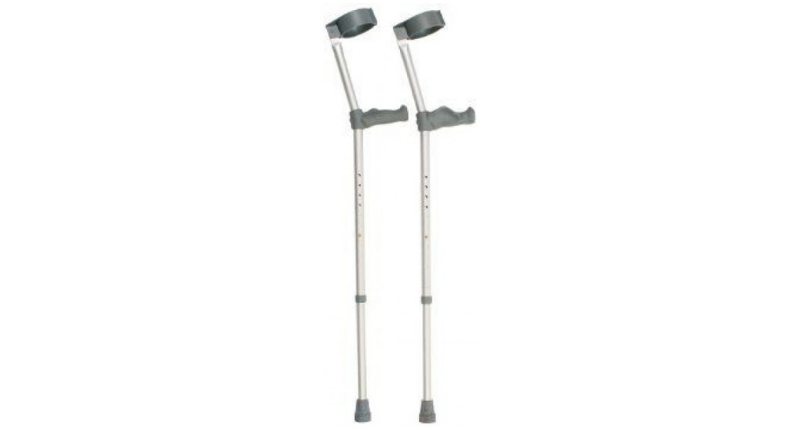 Whether you’re on crutches for a week or months at a time, investing in crutches will aid in your recovery and help you move more easily. They offer ergonomic crutches, which are not only comfortable but affordable.

Another option in Ireland is via Vivomed. They have non-slip elbow crutches that come in standard and extra-long, ensuring they’ll fit almost everyone.

You can’t go wrong with ordering crutches on Amazon. They have a larger selection of crutches to choose from, and if you have Amazon Prime, you can get them very quickly.

There are several different types of crutches. If you’re unsure which is the best for you, take a look at the different crutches.

Walking crutches are used when you can put weight on the injured foot. The crutches are there to support you in case you need to take some weight off.

A platform crutch is the combination of a cane and forearm crutch. The platform is where you’ll lay your forearm down while gripping the handgrip. They’re great for those without a lot of arm strength.

Leg support crutches allow you to keep weight off your injured foot without using any arm strength. Your knee stays bent, and it’s placed onto a platform. There are cuffs around your thigh to keep your leg in place as you walk. 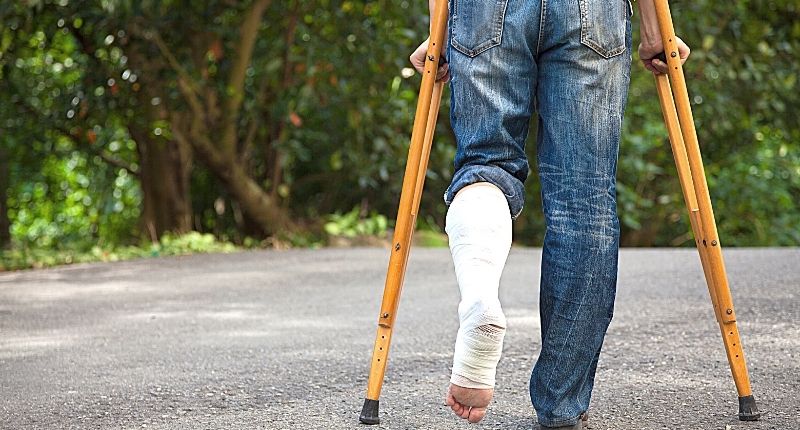 There’s more than one way to walk with crutches. Here are the most common ways.

This gait is for when you can put some weight on both legs. You’ll start with the right crutch moving forward, left foot, left crutch, and right leg.

A two-point gait is another option if you can bear some weight on both legs. You’ll move the right crutch and left leg forward and then the left crutch and right leg.

A three-point gait is used when you cannot put any weight on the injured foot. You’ll move both crutches and injure your foot forward first, followed by your weight-bearing foot.

You use swing gaits when you have a brace or paralysis on your legs. You’ll move both crutches forward and then both legs afterward.

How to Get Upstairs on Crutches

If you need to get up or down the stairs on crutches without a railing, you’ll use both crutches to aid you. You’ll slowly place both crutches on the stair in front of you and step with your good foot first.

Then you’ll bring your injured foot to the same step. You’ll continue this until you make your way all the way up or down the staircase.

How to Use Crutches on Stairs with a Railing

To go upstairs, you’ll use one crutch and place your other hand on the railing. You can hold both crutches in one hand or give them to someone else to hold if you can. You’ll step up with your good leg and then bring the injured one to the same step, keeping most weight off it.

When Should I Use Crutches?

There are several reasons why you may need to use crutches. Some of the most common reasons would be because you have a sprained ankle, knee pain, or a broken bone in your leg, foot, or ankle.

Other reasons physicians encourage patients to use crutches is they have sciatica, back pain, and fibromyalgia.

Where to Bear Weight When Using Crutches

Regardless of how much weight you can or cannot bear on your injured leg, you’ll want to bear weight in your hands. If your hands are sore when using crutches, it means you’re doing it correctly.

How Long to Use Crutches After a Hip Replacement

Everyone’s different, but most patients who have a hip replacement are on crutches for about four weeks.

Alternative Devices to Use

Depending on your situation, crutches may not be the best option. That being said, you probably still need a mobility device. Knee scooters and wheelchairs are both viable options.

✅ Can Women Use Crutches When Pregnant?

Yes! Many pregnant women use crutches to reduce pelvic pain during pregnancy.

✅ When Shouldn't You Use Crutches?

If your doctor puts you in a walking boot, you no longer need to use crutches since the device will protect your foot as you move around.

✅ What to Do With Used Crutches?

You can keep them for if you ever need them again, donate them, or resell them to someone else.

✅ Are Crutches Free on the HSE?

They're not. You can get crutches through the HSE, but you'll have to pay as you would with other suppliers.

✅ How Long Are You on Crutches After Surgery?

It depends on the surgery. You can be on crutches for anywhere from two to six weeks for most surgeries.

✅ How to Make Crutches More Comfortable

Cushioning is going to make crutches more comfortable. You can add a towel, blanket, old shirt, whatever you want. You'll wrap it around the hand grips or underarm supports.

✅ Which Crutches are Best for after Knee Surgery?

The eBay crutches to get you moving after knee surgery are going to be underarm or elbow crutches. This allows you to keep all weight off of your leg while still being able to move around.